The national weekly median asking house rent has increased by 14.8% over the past year to $521, with the April house vacancy rate declining to 1.2%.

All capitals have recorded significant increases in monthly asking house rents over the year ending April 2022, with Sydney the highest up 22.8% followed by Canberra higher by 14.5% and Adelaide up 11.9%.

Vacancy rates for houses remain at record lows and still falling generally with Melbourne, although still the highest, steady at 1.9% over April.

Other capitals with the exception of Perth and Sydney continue to report vacancy rates below 1.0%.

Canberra continues to report the highest capital city weekly house rents steady at $700 over the month followed by Darwin at $630 and Sydney again rising to $620.

Brisbane has the most affordable weekly house rents steady at $450 over April. 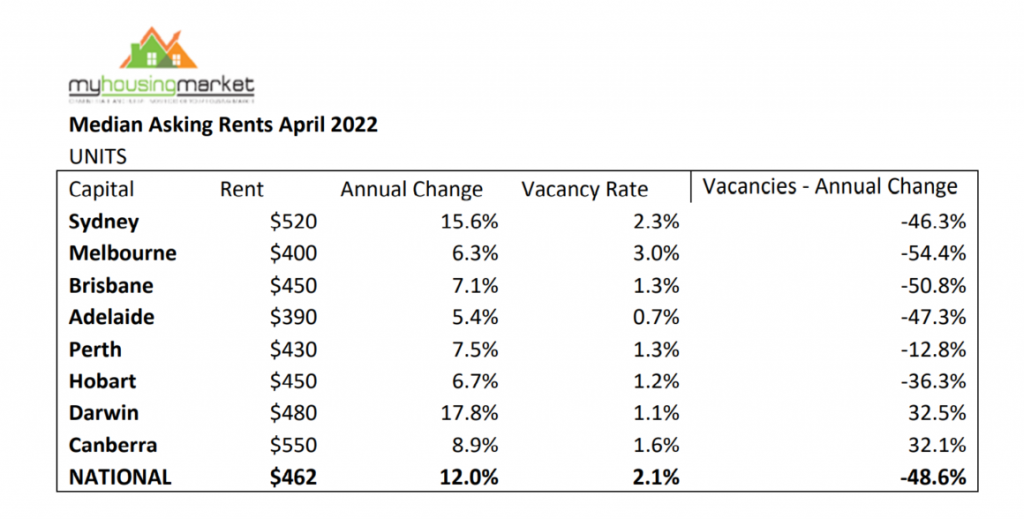 Unit rentals have also recorded strong increases generally over the past year with the April national median weekly asking rent for units at $462 – an annual increase of 12.0%, with the national vacancy rate for units falling to 2.1% over the month.

All capitals have reported increases in unit rents over the year to April with Darwin reporting the sharpest increase – up by 17.8% followed by Sydney up 15.6%.

Capital city vacancy rates for units have continued to fall over April, with Sydney and Melbourne down again to 2.3% and 3.0% respectively.

Similar to houses, Canberra again reported the highest weekly asking rents for units over April but again steady at $550, with Adelaide the most affordable but higher at $390.

Demand for rental homes will continue to increase over 2022 driven by strong economies, the easing of covid restrictions and concerns, and the return of high

levels of migration and students – all set to exacerbate a chronic undersupply of rental accommodation.

Higher rents and strengthening returns for investors are a clear consequence of a current clear and likely extreme mismatch between supply and demand in home rental markets.

Higher mortgage interest rates for investors are also likely to be passed on to tenants providing more upward pressure on already high and rising rents.

WHY THE RATES INCREASED

Australia’s inflation rate has predictably increased sharply again over the March quarter to the highest levels reported since the introduction of the GST in 2000 impacted prices.

The ABS reports that the headline CPI increased by 2.1% over the quarter for an annual rise of 5.1% – well ahead of the 1.3% quarterly rise and 3.5% annual rise recorded over the previous December quarter. 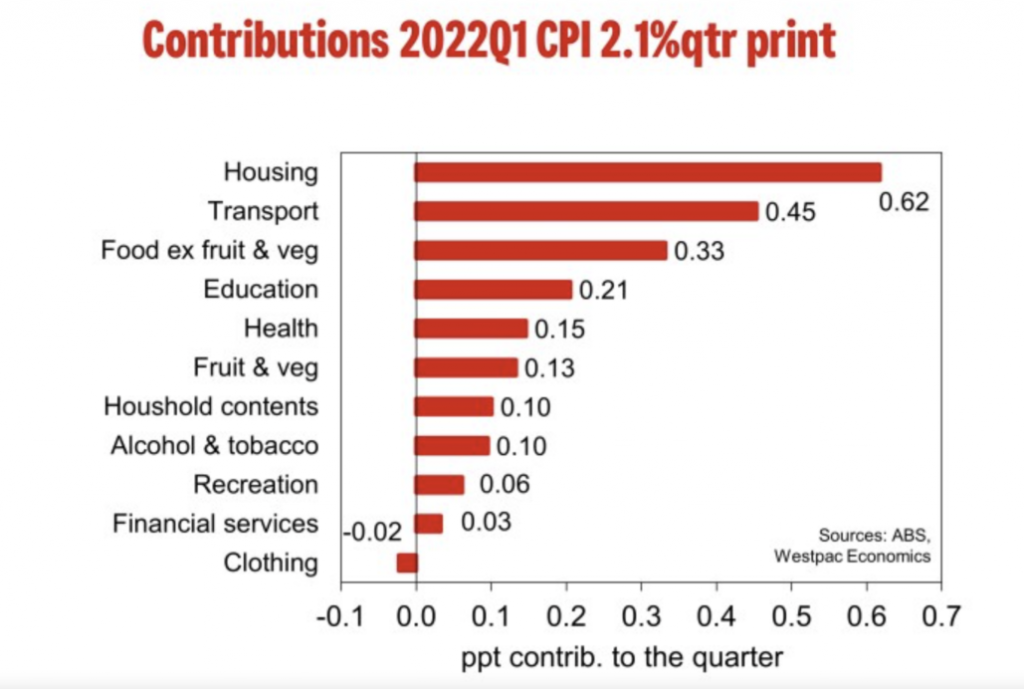 The primary drivers of the recent inflationary outbreak remained covid-related increases in the price of fuel and house building costs.

Supply constraints struggling to match demand from covid stimulus policies and the Ukraine war raised the price of oil to record levels over the March quarter; with the government 2021 HomeBuilder initiative driving unprecedented demand for new houses resulting in shortages of labour and materials driving a predictable spike in building costs.

Although CPI has increased sharply over previous quarters, it remains well below the previous severe inflationary outbreaks recorded through the 1980s. 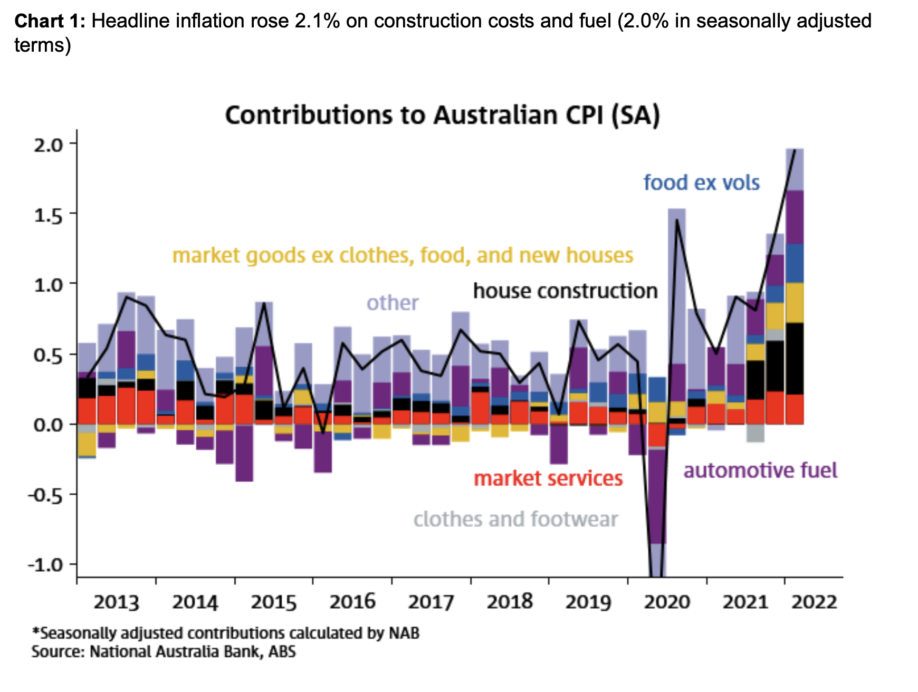 Australia’s inflation rate also remains well below the annual levels recorded recently by similar advanced economies with the US at 8.5%, NZ at 6.9%, Canada, at 6.7% and the UK at 6.2%.

The RBA has indicated that rising inflation in concert with rising wages is a trigger for an increase in official rates – designed to quell demand and cool inflation.

The Bank however has seemingly changed its stance recently, indicating that it is now prepared to act sooner rather than later to increase rates. As it did the other day.

That may indicate that its consistently stated precondition for a rate rise – sustained strong wages growth, may no longer apply to its decision-making criteria.

Although record low rates are likely to remain on hold again over May, next week’s RBA meeting commentary and the ABS March quarter Wages Index data to be released on May 19th will be revealing. 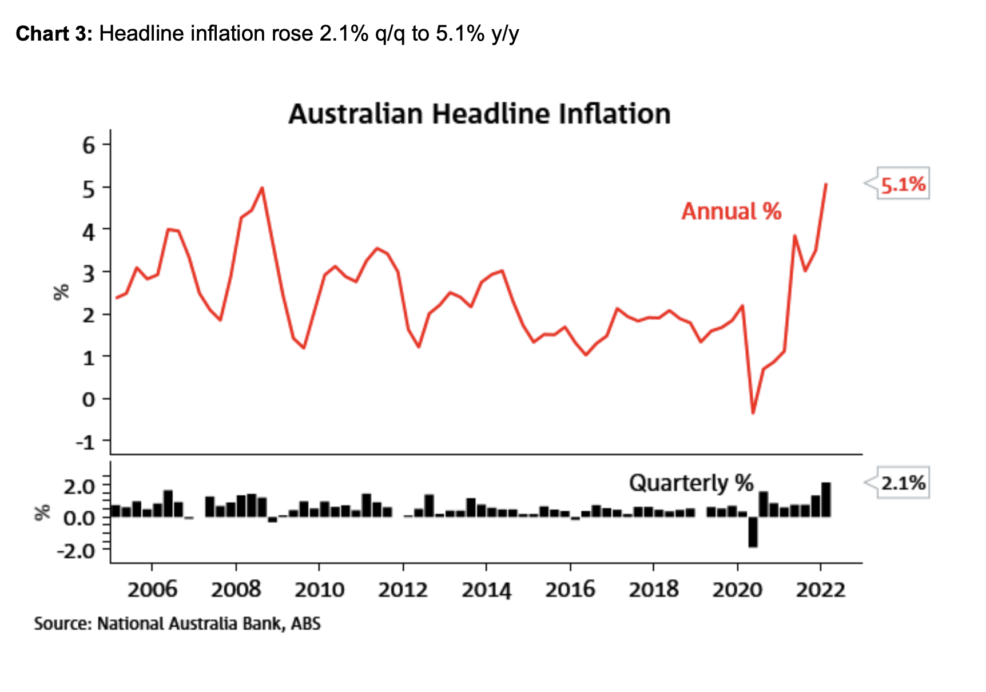